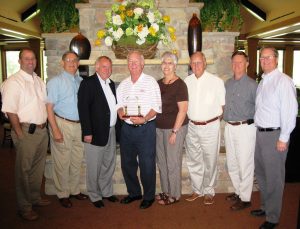 The Hall of Fame honors municipal officials who exemplify the best in public service, and who, throughout their careers, have made extraordinary contributions to their communities and Georgia’s cities.

Gary McCullough has served the city continuously since he was elected to the council in 1990. He was elected mayor in 2004. During his tenure, he has played a key role in securing state and federal grants and other financial assistance to help his city.

As mayor, he provided leadership to implement financial policies that put the city’s water and sewer utilities on a sound financial basis, making it possible for Dahlonega to issue bonds and construct a new $27 million water treatment plant that will serve the city and county’s needs into 2040 and beyond.

He has been an active supporter of GMA, serving on the Board of Directors and the Legislative Policy Council. He currently serves on the Georgia Environmental Finance Authority.

“The city’s numerous accomplishments and accolades attained during Mayor McCullough’s tenure will have a continuing and positive impact on the quality of life of his city, as well as the county and surrounding areas, for years to come,” said GMA Executive Director Jim Higdon.