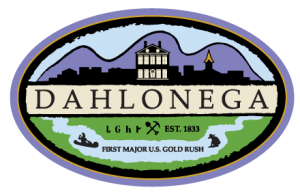 The City of Dahlonega, the county seat of Lumpkin County, is in the foothills of the North Georgia mountains, approximately 70 miles north of Atlanta. The year-round population of Dahlonega is estimated to be 7,000 with seasonal increases that go along with being home to a major state university.

Incorporated on December 21, 1833, Dahlonega was the site of the first significant gold rush in the United States. Between 1838 and 1861, a U.S. Branch Mint produced the Half Eagle, Quarter Eagle, Gold Dollar, and the Three Dollar Gold coins locally. The University of North Georgia, founded in 1873 in the abandoned mint building, was the first state-supported college in Georgia to grant a degree to a woman and is now one of six senior military colleges in the U.S. with expanding undergraduate and graduate programs.

Officially incorporating a few years after the discovery of gold in 1828, Dahlonega continues to be influenced by this discovery. Today, tourists come to shop and dine in the historic town square, learn about the city’s colorful history, try their hand at gold panning, and visit the area’s local wineries

The discovery of gold in 1828 in present-day Lumpkin County caused one of the first major gold rushes in the nation. Miners poured into the Cherokee Territory, beginning a period known as the intrusion when the U.S. Army tried unsuccessfully to eject the intruders. Rough mining communities sprang up. The earliest of these was Auraria, located southwest of present-day Dahlonega.

In 1832, the Cherokee lands, which had been seized by the State of Georgia, were distributed to the people of Georgia by a land lottery. Lumpkin County was created and Auraria temporarily served as the county seat until a permanent site could be selected.

In 1833, an unnamed site, which would become the City of Dahlonega was established as the official county seat of Lumpkin County on Land Lot 950, 12th District, 1st Section. The new town was surveyed and the present day gridiron pattern with a public square was laid out. A permanent courthouse was built on the square in 1836 and residential and commercial uses developed around it.

In 1837 the Cherokees were forcibly removed from the territory to be resettled west of the Mississippi River. A location known as “the station,” from which the State Historical Marker is missing, was the local site for collecting the Cherokees for their removal via “The Trail of Tears.”

The U.S. Government recognized the importance of gold mining in Lumpkin County and in 1838 established the U.S. Branch Mint at Dahlonega, for the minting of gold coins only. The branch mint operated until the start of the Civil War, ceasing operation in June 1861. In 1871 the U.S. Government passed ownership of the mint to the State of Georgia for the establishment of North Georgia Agricultural College, later North Georgia College and State University, now known as University of North Georgia.

The branch mint building burned in 1878 and in its former location, the construction of Price Memorial Hall began in 1879. It was completed in 1880. Toward the late 1840’s the easy gold began to “pan out” and many miners moved to the gold fields in California and Colorado. however, the lure of gold was not forgotten in Dahlonega. New efforts at gold mining started again in the mid-1850’s and the early 1900’s as mining technologies developed.

In the mid-1960’s, Lumpkin County moved it’s county Government operations from the 1936 courthouse to a new site away from the public square. The old courthouse became a state-operated gold museum, and revitalization projects kept the historic square alive by attracting tourists to the colorful historical landmarks of this old gold mining town.

Dahlonega is home to numerous historic properties––houses, commercial buildings, public institutions, and educational buildings. A landmark resource survey was completed, identifying and cataloging resources and community assets. This effort focused primarily on the Dahlonega Courthouse Square and the streets immediately surrounding the square. More than 178 resources were recognized as part of the original survey and the inventory is continuously updated by the Dahlonega Historical Society.

The threats to historic resources are various and often numerous. Most often, the most significant risks come from demolition by neglect and abandonment of landmark resources, followed by incompatible alterations or reuse. Development pressures can also negatively impact historic resources. To help ensure the city’s rich heritage, Dahlonega utilizes a Council-appointed Historic Preservation Commission and a Downtown Development Authority to help preserve the past while guiding its future.

Set in rural Appalachia, Dahlonega is a beautiful, thriving community of historical significance, academic excellence, and military renown. A City of Excellence, Dahlonega, provides quality services through ethical leadership and fiscal stability, in full partnership with the people who choose to live, work, and visit.

To be an open, honest, and responsive city, balancing preservation and growth, and delivering quality services fairly and equitably by being good stewards of Dahlonega’s resources.

There is a new procedure for requesting an Open/Close of a Cemetery Lot. You will first need to follow the link below. Once you are there you will either need to sign in under your already created login or create a new login (top right corner). You may either search… Read Full Answer

The Mayor is elected the Chief Executive Officer of the City of Dahlonega. They possess all of the executive and administrative powers granted to the city under the Constitution and laws of the State of Georgia, and all the executive and administrative powers contained in the City Charter. The Mayor presides at all meetings of the council, votes as a member of the council only at such times as are necessary to break a tie or deadlock of the council, to be the official head of the City for the service of process and for ceremonial purposes, has the power to administer oaths and to take affidavits, sign all written contracts entered into by the council on behalf of the City and all other contracts and instruments executed by the City which by law are required to be in writing, sees that all laws and ordinances of the City are faithfully executed, and performs other duties as may be required by law, the City Charter or ordinance or as otherwise directed by the City Council. 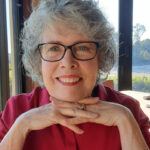 Serving the community is a passion for me. Dahlonega is a wonderful place to call home! My priorities include:

• Preserving Dahlonega’s unique “sense of place”, retaining the welcoming small-town feel and ambiance of our incredible community
• Fiscal responsibility – ensure that your tax dollars are being used wisely in the best interest of the total community
• Rebuilding infrastructure: most folks don’t care about pipes, roads, etc. until they do!
• Regular maintenance and enhancement is a responsibility of government which can be easy to ignore but requires constant vigilance and investment.
• Addressing inevitable growth appropriately. Keep the look and feel of our award-winning downtown.
• Supporting business through improvements in city processes and promptness.

Ken and I have lived in Dahlonega since 2004, been property owners and taxpayers since 2000. I had the great opportunity to participate in the Chamber of Commerce’s Leadership Lumpkin program in 2009, shortly after I retired. Past and present volunteer roles include:

After a 32-year career with IBM, I retired from my position as Vice President in the Global Telecommunications Industry. I hold a BA in English Literature from Mercy College and am a Certified Sales Executive. My career was extensive and interesting, I held many different positions including global executive and line management, applications development, systems programming, systems engineering, and large systems specialist. When I’m not busy in the community, I enjoy spending time with family, reading (a passion!), playing golf, baking bread and preserving, and spending time outdoors. I’m very appreciative of the opportunity to serve in a community that I love!

Employee of the Year Recognitions

(February 6, 2023) The Dahlonega City Council honored four employees this evening for exceptional service to their community in 2022. Garrett Harris and Miki Mullis…

The Dahlonega City Council will hold a Utility Retreat for strategic planning on Friday and Saturday, February 10 and 11, 2023, at the Brasstown Valley…

The City of Dahlonega is requesting sealed bids for one (1) current year model telescopic boomlift. Questions regarding Project #2023-006 will be accepted in writing…

The City of Dahlonega is seeking a vendor to provide design, equipment, software, installation, maintenance, and onsite training of an Outdoor Wireless Sound System for…

Hourly Rate:  $12.19 – $15.54 Position Information:  Full Time - Temporary Job Duties: The purpose of this classification is to perform sanitation duties such as…

The City of Dahlonega Roads, Wastewater and Collections staff worked diligently over the holidays to ensure that our infrastructure was protected against the extreme winter…

Documents
(Scroll within the documents section to view more documents)

City of Dahlonega Charter with Ammendments