The Mayor presides at all meetings of the council, votes as a member of the council only at such times as are necessary to break a tie or deadlock of the council, to be the official head of the City for the service of process and for ceremonial purposes, has power to administer oaths and to take affidavits, sign all written contracts entered into by the council on behalf of the City and all other contracts and instruments executed by the City which by law are required to be in writing, sees that all laws and ordinances of the City are faithfully executed, and performs other duties as may be required by law, the City Charter or ordinance or as otherwise directed by the City Council.

Contact the Mayor & Council
Use the link above to send an email message to the mayor and council members. 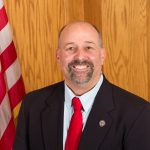 Mayor Norton was born and raised in South Georgia (Lakeland) where he still owns the family ‘Norton Farm’ which grows pecans and timber. He has lived in Dahlonega Georgia since 2000. A modern-day renaissance man he has been a home builder, merchant, and politician at various times and all three at one time.

Mayor Norton is an established entrepreneur operating three businesses in Dahlonega with his wife Julia. He is readily accessible and typically available most any time at his restaurant in Historic Downtown Dahlonega. Constituents are welcomed to stop by for a cup of coffee and discuss concerns or just catch up. If by chance he is not in, his business card with cell phone number is openly displayed on the counter. Mayor Norton is one of the most accessible elected officials in the county.

Starting his Dahlonega public service on the Dahlonega Historical Preservation Commission, Mayor Norton later was elected as President of the Dahlonega Merchant Association by his peers. He has served on the Dahlonega City Council since 2006 and is the previous chairman of our thirteen county Georgia Mountains Regional Commission as well as various other appointments and committees. He is an Executive Board member of the Georgia Municipal Association of Georgia as well as board member of the Training Committee which develops mandatory and elective training programs and policy for elected officials statewide.

Mayor Norton has been a consistent member of the Chamber of Commerce since 2000, Chairman of the Lumpkin County High School Governance Board and a current member of the Dahlonega Sunrise Rotary Club.

“Your encouragement and support are appreciated, and your trust is cherished. I am honored for the privilege to serve you”-Sam Norton