In February 2018, Architectural Digest surveyed the U.S. to find the 21 Best Small Towns in America, Dahlonega was proudly listed as #3. Our gold rush background, outdoor activities, and stunning wineries helped us stand out from the rest of the nation. 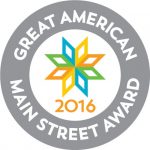 The National Main Street Center, Inc. selected Dahlonega, Georgia as a 2016 Great American Main Street Award® winner. The City of Dahlonega and the Dahlonega Main Street program were recognized at the 2016 Main Street Now Conference held in Milwaukee, Wisconsin along with Audubon Park in Orlando, Fla and Shaw District in Washington, D.C.

“The 2016 GAMSA winners have succeeded in making their towns an exciting place to live, work, play and visit through implementing our historic preservation-based methodology for downtown revitalization,” said Patrice Frey, president, and CEO of the National Main Street Center. “In each locality, the local Main Street organization has collaborated with residents, business owners, and other local partners to revitalize their district by promoting the assets that make that community special.”

Each year, the National Main Street Center recognizes exceptional Main Street communities whose successes serve as a model for comprehensive, preservation-based commercial district revitalization with the Great American Main Street Award (GAMSA). Since the award’s inception in 1995, over 90 Main Street programs have been honored. Click here to view the full article on the Main Street America website.

GFOAThe Certificate of Excellence in Financial Reporting has been awarded to the City of Dahlonega by the Government Finance Officers Association of the United States and Canada (GFOA) for its comprehensive annual financial report (CAFR). The Certificate of Achievement is the highest form of recognition in governmental accounting and financial reporting, and its attainment represents a significant accomplishment by a government and its management.

The City of Dahlonega has received the CAFR award for nine consecutive years and is one of 2,000 cities across the United States receiving the award this year. Approximately 13% of the cities in Georgia receive the CAFR award each year, and only 1% of the cities in Dahlonega’s population category receive the award each year across the United States.

The GFOA is a nonprofit professional association serving approximately 17,500 government finance professionals. The GFOA established the CAFR Program in 1945 to encourage and assist state and local governments to go beyond the minimum requirements of generally accepted accounting principles to prepare comprehensive annual financial reports that evidence the spirit of transparency and full disclosure and then to recognize individual governments that succeed in achieving that goal. The CAFR has been judged by an impartial panel to meet the high standards of the program including demonstrating a constructive “spirit of full disclosure” to clearly communicate its financial story and motivate potential users and user groups to read the CAFR.

Dahlonega’s Main Street Progam is guided by the 7 volunteer members of the Downtown Development Authority and the Mayor and City Council. The City of Dahlonega’s historic downtown was also honored in 2010 by the Georgia Downtown Association when it received the “Award for Excellence in Downtown Development” ranking it as Georgia’s top downtown of the year. Click here to read the full article. 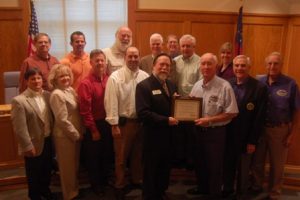 “We congratulate this year’s accredited National Main Street Programs for

The Appalachian Trail Communities Award is designed to Thank trailside communities for the decades of service they have provided to hikers, Recognize those communities who are taking extra steps to promote the asset of the A.T. in

their backyards, Communicate ways to engage the next generation of trail stewards, Support community initiatives for sustainable economic development and conservation planning.

Preserve America Communities demonstrate that they are committed to preserving America’s heritage while ensuring a future filled with opportunities for learning and enjoyment. This community designation program, combined with the Preserve America Grant Program, Preserve America Presidential Awards, and other federal support, provides strong incentives for continued preservation of our cultural and natural heritage resources. I commend you for your commitment to preserving an important part of our nation’s historic past for visitors, neighbors, and, most importantly, for children.

Dahlonega, GA has been named a Tree City USA community by the Arbor Day Foundation to honor its commitment to community forestry. Dahlonega has received this national recognition since 2001. The Tree City USA program is sponsored by the Arbor Day Foundation in cooperation with the National Association of State Foresters and the USDA Forest Service.

21 of the Best Small Towns in America

While there's nothing quite like the energy of the big city, the hectic pace isn't for everyone, and urbanites themselves often need a respite. Luckily,…

PRESS RELEASE September 19, 2016 The Certificate of Excellence in Financial Reporting has been awarded to the City of Dahlonega by the Government Finance Officers…

Dahlonega was recently honored when First Lady Laura Bush, Honorary Chair of the Preserve America initiative, designated it as one of the nation’s newest Preserve…

Dahlonega, GA has been named a Tree City USA community by the Arbor Day Foundation to honor its commitment to community forestry.Â Dahlonega has received this…